OAK – A response to Letter to the Unknown Soldier 2014 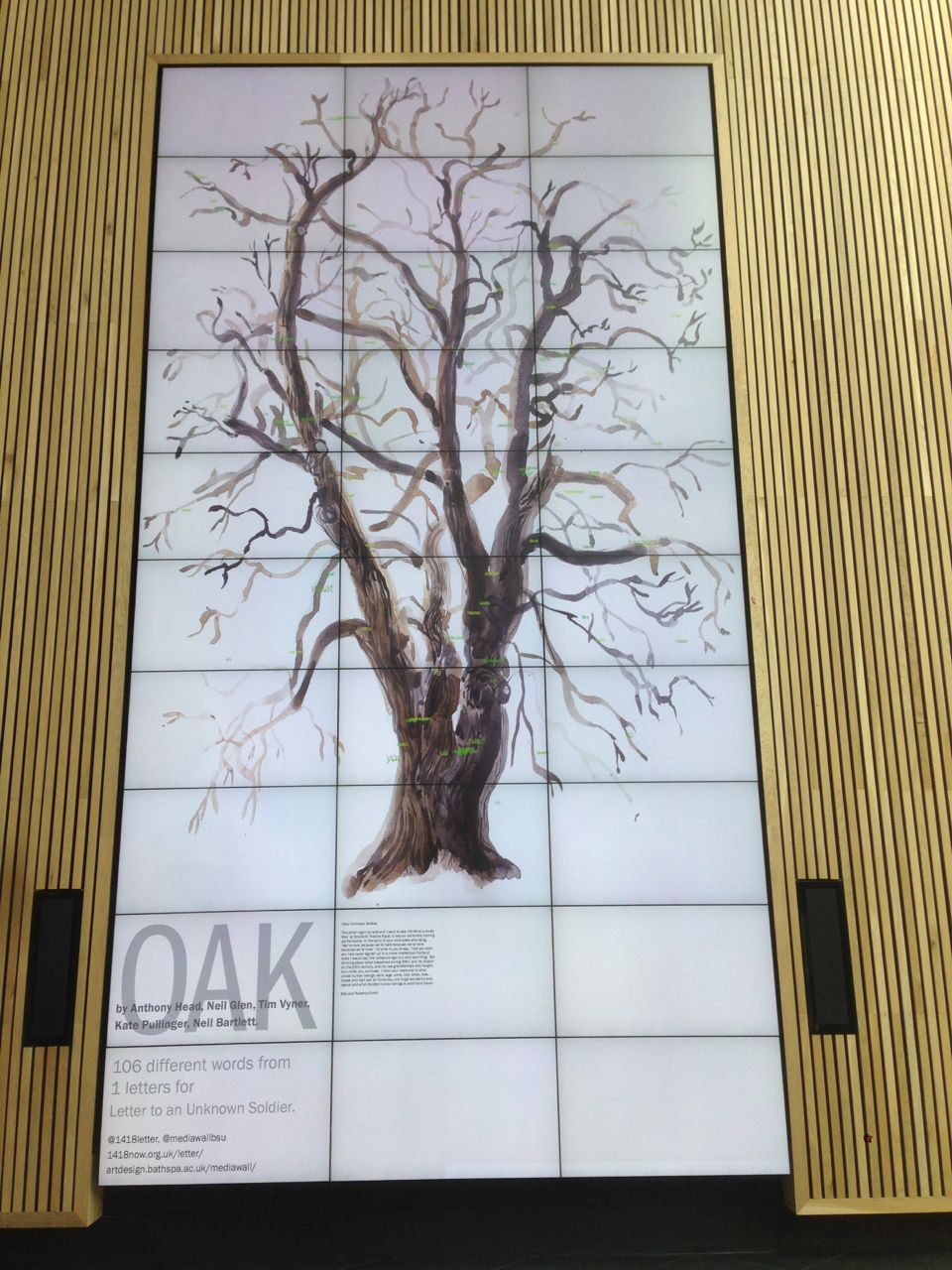 The very first letter is read. 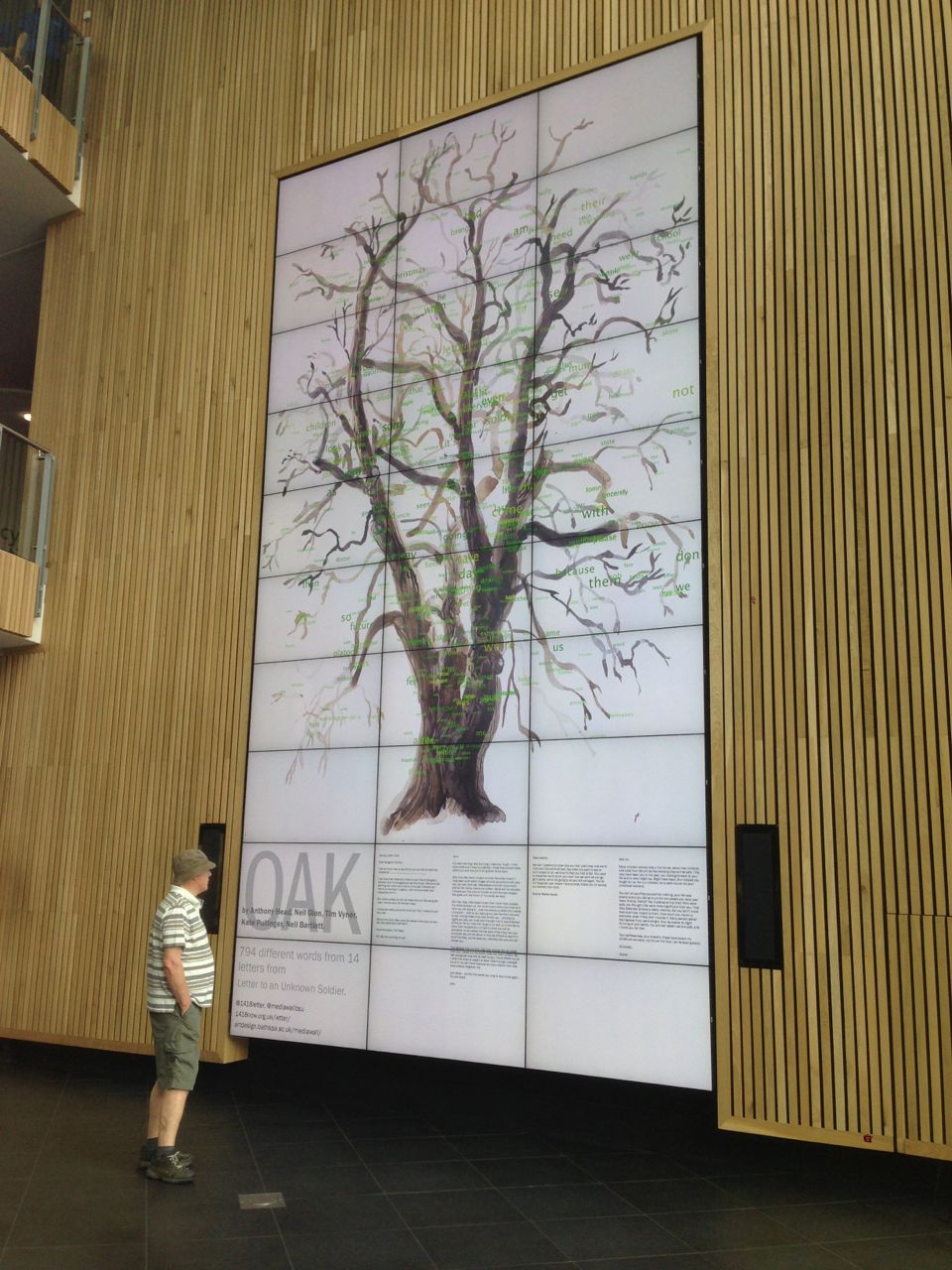 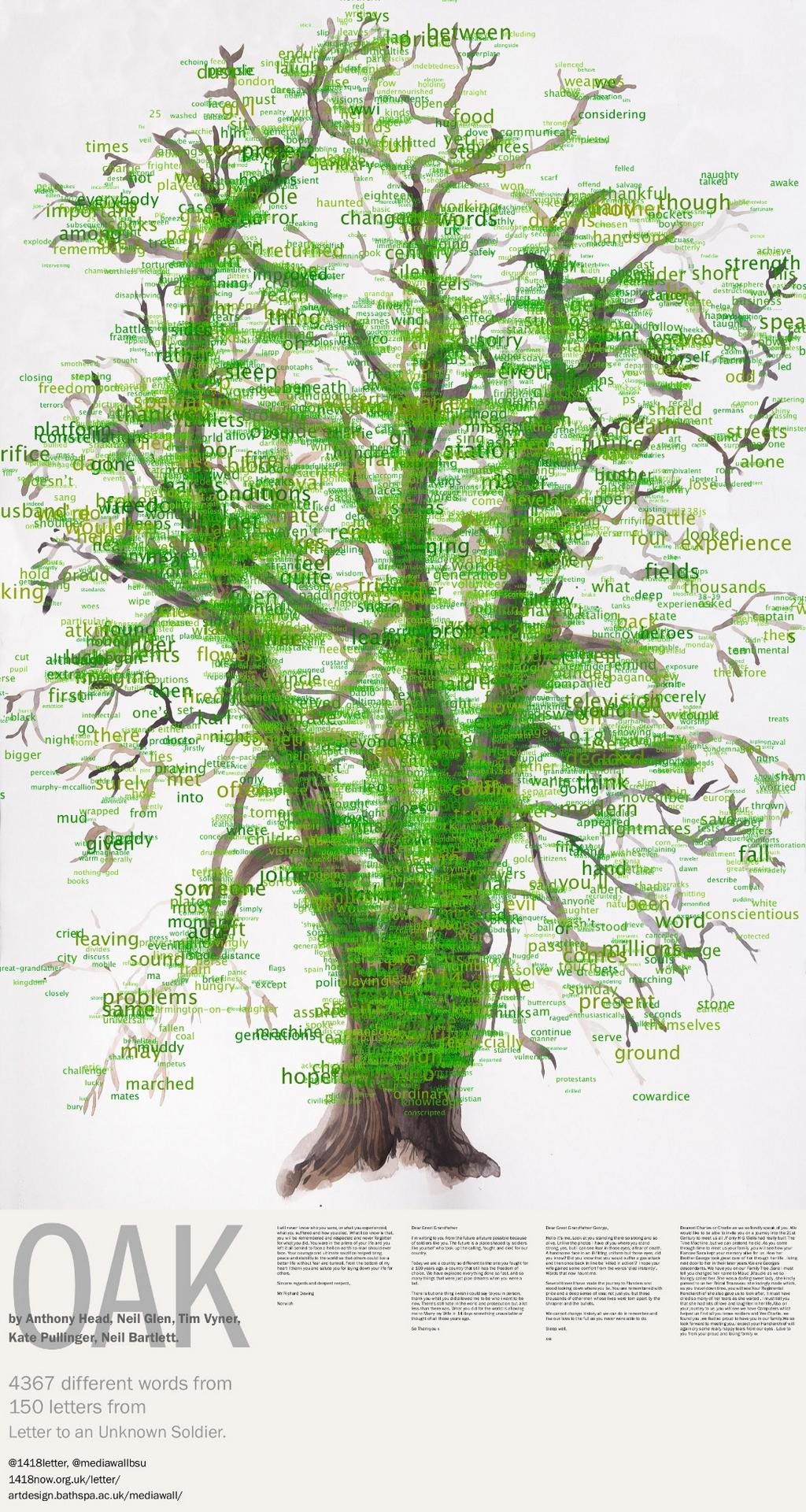 A screen capture of OAK after reading 150 letters. 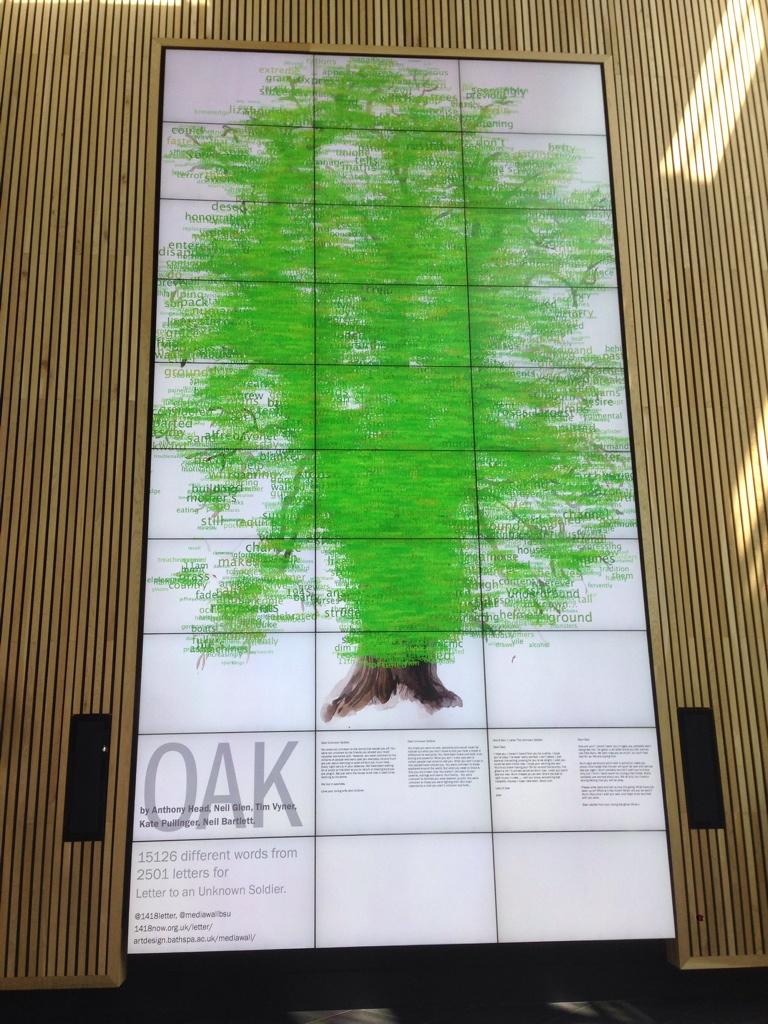 OAK is a realtime generated text analysis project that reads each of the letters that have been submitted as text to the Letter to an Unknown Solider website. It features a hand painted oak tree, the latest four letters from the public and all of the words analyses so far on the tree, that appear as leaves that fall when they reach a particular popularity. After that they regrow on the tree, hence the tree showing all of the different words that have been written in the letters.

What is the inspiration for OAK?

Many of the projects that I do are collaborative to varying extents, OAK is no exception. Several months ago, when I heard about my colleague Professor Kate Pullinger’s new project, I was intrigued. Kate’s project was the now highly successful and poignant Letter to an Unknown Soldier, itself a collaboration with Neil Bartlett, and part of the 14-18 NOW commissions.

One of my roles is to curate the MediaWall at Bath Spa University, and I wanted to create a project that dealt with the potential mass of information that would be submitted to the Letter project. In the Letter project, the public were going to be asked to write a letter to the statue of an unknown soldier. The statue is situated in Paddington Station and was created to remember the men of the Great Western railway who fought in the war. I wanted to have a project that could, in some way, represent all of the words that people write to the Unknown Soldier.

At this point I was working with my colleague Neil Glen. We were looking at ways of displaying text on the MediaWall. The MediaWall is seven metres high, made out of 30 x 55 inch LCD screens, in a 3 x 10 formation. We can output any kind of digital media to the wall, but the resolution is variable, with a theoretical maximum resolution of 5,760 x 10,800 pixels. However, when we connect one computer to it, we need to work at lower resolutions (the limit of the computer). So far, projects that we’ve run on it have been at 1920 x 3600 or 1920 x 6000 pixels. This is still pretty big in resolution terms for realtime media but the MediaWall is big too, so we needed to work out the minimum size of text that we could display, elegantly.

After a period of thinking and experimenting with displaying text on the MediaWall, I thought of the idea of analysing the text from the letters in order to create an image of a tree. In essence this would be a word cloud, showing the frequency of the words, however word clouds usually are only used for a 100 or few hundred words. Through conversation with Kate Pullinger, I was aware that the Letter to an Unknown Soldier is likely to generate possibly tens of thousands of different words. This would mean that a standard word cloud would not fit. However, a tree does have tens of thousands of leaves, so this felt appropriate.

The natural choice for the tree was an OAK, for a start there are many oak trees in the Capability Brown landscaped grounds at Bath Spa University. Also the oak tree is a national symbol of many countries and a symbol of strength and endurance. All of these qualities seemed appropriate for a project about World War I.

Usually, in my art projects I use either Unity3D or Processing as environments in which to write code. I thought about whether to make this project in 3D, but decided against it. I used Processing, working in two dimensions, as this felt more akin to a piece of print, a letter. My first actions were to experiment with word counting algorithms and ways to directly read the letters from the Letter to an Unknown Soldier website. This involved stripping out the extraneous HTML code to leave just the plain text, after several weeks of experiments and tests on the MediaWall I was happy with the coding. I had to make the decision not to include any scanned letters, even though there were a lot of very interesting letters written this way. Unfortunately, reading the hand-written text was going to be too complicated.

The other important elements of the project were the fonts used and the tree itself. Neil Glen selected fonts that were appropriate to the period of World War I, and we used these in the project. I invited my illustration colleague Tim Vyner to paint a tree for the project. We went out into the grounds and selected an appropriate tree, a grand several hundred year old oak near the entrance the the Bath Spa University, Newton Park grounds. Tim painted an excellent skeletal tree, without leaves even though it was summer, its strong bows made a suitably monumental platform to place the wordleaves on to.

So the elements were complete, the tree, the font, the layout, letters and the words growing and falling. Finally, I set the time period for each letter to be read, 2 minutes. We started OAK a few weeks after the Letters to an Unknown Soldier, allowing plenty of letters to be submitted. At the time of writing, the Letters project has officially stopped taking more letters, having received over 21,000 of them, but OAK is still carrying on, catching up on reading the letters that the public have submitted by typing into the website. It will end when its read all of the letters.