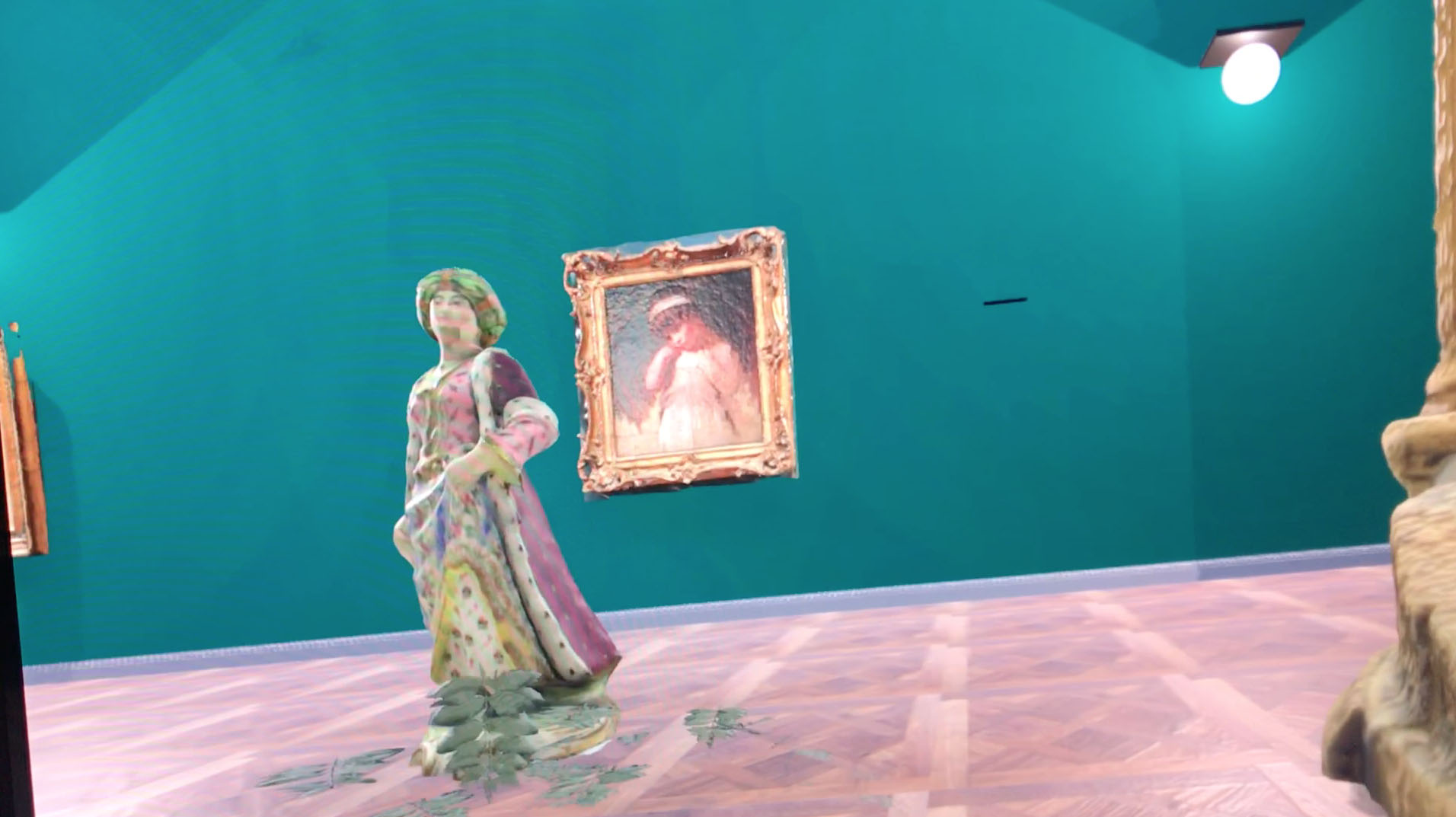 What happens when we make miniature figures life size, how does our perception of them change?

The Wow! Museum presented a collection of figurines and other objects from the Holburne, normally hidden to the public. The project’s intention was to explore notions of scale in relation to objects that are normally small, as well as finding ways to engage new audiences with museum collections. Objects were scanned (with the support and guidance of Holburne Curator Catrin Jones), using photogrammetry and scaled up to life size and placed into a virtual recreation of the top floor gallery in the Holburne Museum. Additional 3D scanned objects were provided by the Bath Cultural Heritage network. 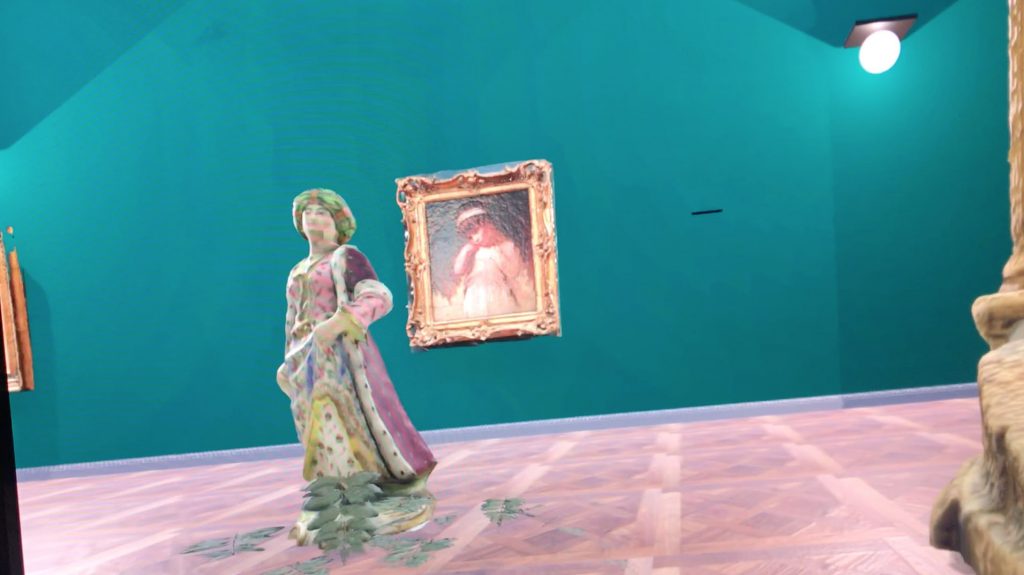 Following on the from Anthony’s previous research into comparing different types of immersive experience, the project had two purposes. 1) to explore the feasibility of using photogrammetry on the Museum’s collection and 2) to test creating an interactive VR experience that would be shown to the public.

Using photogrammetry was a bit hit and miss. It generally didn’t work well for objects with had high reflectivity or elements of reflectivity. Some of the china objects did scan well, whilst others didn’t. Photogrammetry is a really easy technique to use, but still a slow process, with an uncertain outcome until you get the resulting 3D model, several hours later. This lack of guarantee means that it currently isn’t a great technique in cost terms if large amounts of a collection is to be scanned. However, for a small number of objects, then it is worth persevering with.

Anthony’s previous immersive research discovered that VR needs to be an active experience for users if it is to be satisfying. Hence, just being able to walk around the collection wasn’t going to be enough, although still interesting in itself. The opportunity to show the project at the upcoming Forest of Imagination event was there, and due to it’s family focussed audience, the necessity to add some playfulness to the museum experience. 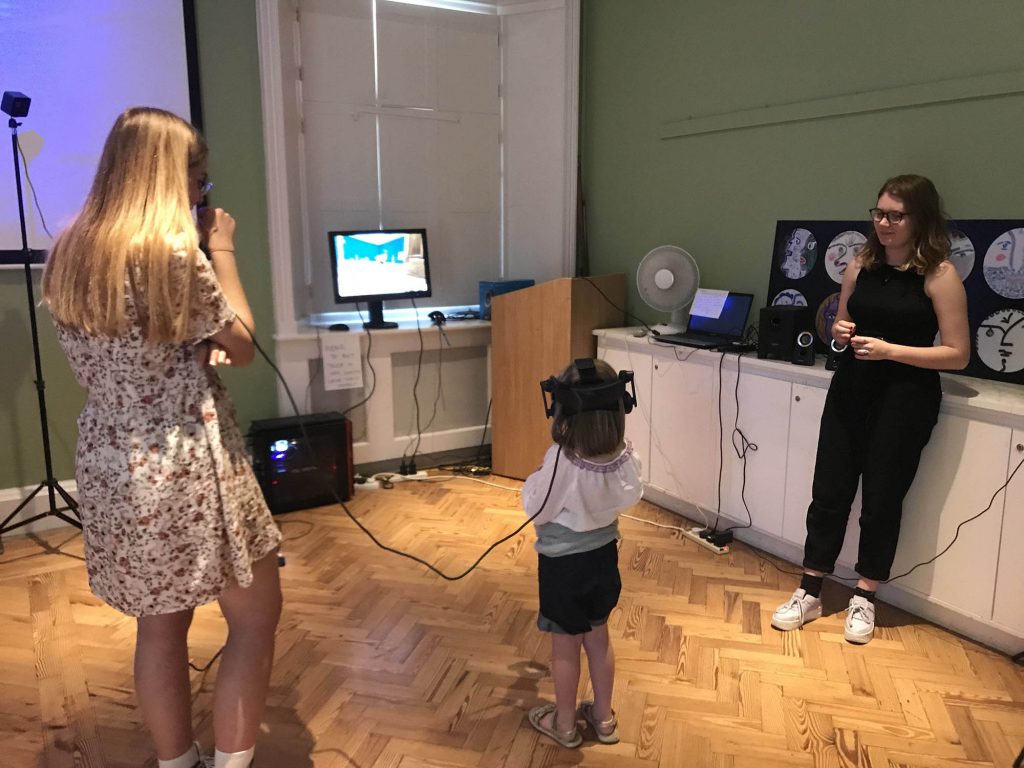 Linking in the Forest of Imagination’s environmental theme, Anthony created an experience that was more sculpture garden and sculpture gallery. When donning the VR headset and controllers participants could spray the room with flowers and plants, and creatures, turning the sculptural space into a wild and magical garden, a museum like no other.

The project was presented at the Forest of Imagination 2019 event at the Holburne Museum from 21st to 23rd June 2019. Most participant traffic was on the Saturday and Sunday. Approximately 250 participants took part over the 3 days, with a 3 minutes experience each and 1 minute explanation of how to use it.

The project was later shown at the SWCTN showcase event in July 2019.

A short questionnaire was offered after participation, asking for age group, previous usage of VR, description of the experience they had just had, and suggestions for what they would have liked to have done.

There were 49 responses, i.e. 20% response rate. Notable statistics are that 63% of all respondents have never tried VR although older children are most familiar with 54% having tried VR at least once.

The most popular descriptive words in response to Q1 were: fun, amazing, really, cool, real, weird, like, immersive, confusing, surreal, felt. Most positive words, with ‘confusing’ possibly relating to the short time to learn how to navigate the experience. ‘Weird’ was usually appearing alongside positive words like ‘fun’. The experience was designed intentionally surreal, to include an unexpected way to approach the collection of objects from the Holburne Museum.

Although predominantly positive feedback, it is hard to disassociate it from being positive purely about the experience itself or the act of using VR. Although, if the The WOW! Museum was a disappointing or poor experience, that would have shown up in the feedback. Careful thought had been given to the project’s design to avoid nausea, particularly knowing that a majority of users would be new to virtual reality. The project was created for the HTC Vive Pro, and participants had to learn how to use three buttons to use the project.

From observation, ages of participants ranged from 4 years old to 50-60 years old.